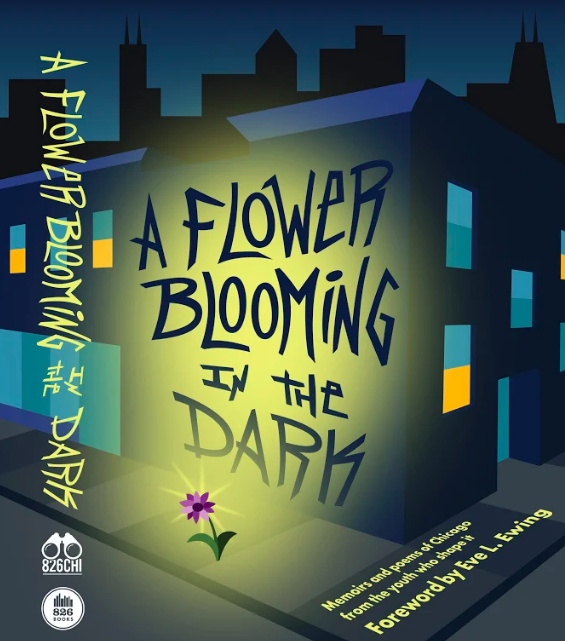 826CHI Releases "A Flower Blooming in the Dark"

On November 24th, Small Business Saturday, we’re releasing our 2018 Young Authors Book Project, A Flower Blooming in the Dark. This collection features poems and memoirs from more than 100 young Chicagoans on the beauty of their city. Throughout the past year at 826CHI, students have (re)discovered Chicago via its art, authors, and neighborhoods and formulated their own Chicago story through a series of generative writing activities. From the National Museum of Mexican Art to vandalism that turns the city into an exhibit, from Chinatown, a place to see the world differently, to La Fiesta Del Sol, a street festival that glows against its surroundings, from Buckingham Fountain to the #49 Western bus, the story of Chicago in A Flower Blooming in the Dark is told by those who know it best: its citizens.

With a foreword penned by local writer and sociologist Eve Ewing, the perspectives in A Flower Blooming in the Dark counter the negative narrative that is often imposed upon Chicago by the media and by non-Chicago residents. These stories from 8th-12th graders from across the city (from Gage Park Austin to Ashburn) do not deny that there is violence in Chicago, but demonstrate that the story is not complete if it just stops there.

Consider the anonymous writer who describes a night out with his fellow graffiti artists, searching for the perfect place to paint. “The lights shined a golden filter down the all-too-familiar Chicago alley: gang graffiti on the garages, broken glass on the rugged pavement, and a few dumpster rats, of course.” Yet, when they ride the train the next morning amongst all the sheepish, indifferent commuters, they beam with pride at their secret achievement. “All along the rooftops were pieces of graffiti. It was like the South Side’s own ghetto art gallery. Most people on the train couldn’t care less about the pieces of vandalism that surrounded them. When our pieces came up, we gazed with pride, knowing that that was our own exhibit.” This writer reminds us to to pause and look out the window every once in a while, so we don't miss the hidden masterpieces our city has in store for us.

A Flower Blooming in the Dark will be available for purchase exclusively at the Wicker Park Secret Agent Supply, in-store and online, beginning Saturday, November 24th.