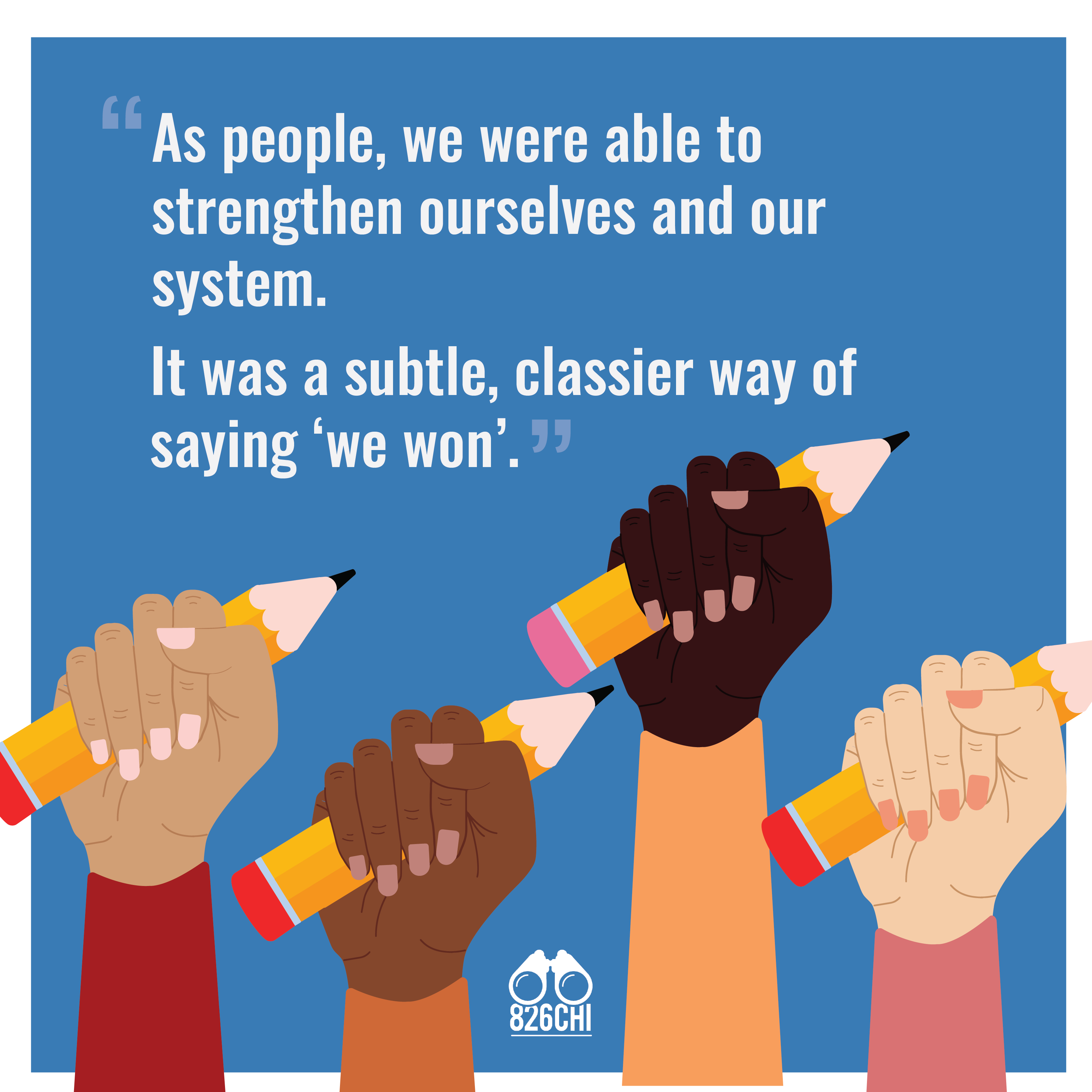 826CHI Students Respond to "The Hill We Climb"

Our students were asked to free-write on what feelings emerged for them when hearing Amanda Gorman's poem, "The Hill We Climb".

Here are their reflections:


“The feelings that emerge from this poem that Amanda Gorman wrote was a feeling of pride in my heritage and my legacy. The line “a skinny black girl descended from slaves and raised by a single mother” really resonated with me because it reminded me of how for a while my mom was a single mom and how she worked really hard to take care of me and my sister.” - Isabel “Izzy” R.

“What is really resonating with me about this poem is the hopeful quality it has. Amanda is part of Gen Z and our generation knows that we’ll eventually be the ones in governmental positions of power. We will be able to make the changes that have been neglected for so long. This Presidential election has renewed my sense of hope in many ways and I am even more hopeful that a lot of younger people are more socially aware and educated on certain issues.


I want adults to know that I am willing to fight for what's right and I will voice that in any way possible, including my writing. Writing is a great way to spread a message in a compelling way and reach a variety of people from different backgrounds.” - Joia B

“Amanda Gorman is striking, in her words and in her being. The strength of her voice and convictions are representative of the America she speaks of. When she talks about our country, conveying the cracks with witty one word rhymes, it almost seems as though "the hill we climb" is only a hill, not a mountain fortress. I want to know who she is thinking of when she refers to "we". Are the terrorists who don't believe in her right to be standing there, part of the we? I think they climb a hill of their own. I hope it is a large one, though my belief in that is waning. I've only ever lived in a liberal bubble, yet hatred often forces its way into my failing oasis. It's in the blue lives matter sign in rural illinois. It's the rising waters of our beautiful lake and our waning winters. So somehow Gorman's hopeful call rings hollow. I know it is true of the attitude of the figurehead she speaks for. I wish it were true of the country she speaks of. ” - Joelle R.

“I loved Gormans inaugural poem SO much. Not only is her tone so powerful, but the language she uses is so vivid and beautiful. One of my favorite parts is when she talks about people trying to impede or break our democracy. The sentiment that, despite all of his efforts, Trump was unable to break down our system is really inspiring. After the last election, and what happened in the capitol, the treasonous tone from so many people (who paradoxically, considered themselves patriots) was truly scary to see. Major news sources talked about a ‘second civil war’. Despite this, as a people, we were able to strengthen ourselves and our system. It was a subtle, classier way of saying ‘we won.’ She’s incredible, and such an amazing poet. ” - Isabela T

“This poem emanates power and bears emotion and vulnerability beyond extent. Being a young hispanic woman in society I experience the rise and fall of change. I am only a teenager and have seen the rise and fall of society. I have seen others rather divide then come together to create beneficial change due to the selfishness and ignorance they obtain. I admire the way she has such a firm ground and will not hold back regarding any issue.” - Esperanza R.

“I very much don’t want to be the bearer of bad news. But, when everyone’s looking down to find whatever marble, rock, or enchantment available on the grass blade covered in a dark shade, there has to be someone who can look up and see the storm. Before I get to my honest thoughts on the direct message of this poem, or at least it’s implications, I just want to give credit where it’s due. I absolutely love the language in this piece. It’s strong, bold, and holds so much weight! From making the audience turn towards the “scriptures” and “vines” to allow them to hope for something and to how silence is the cause of why evil spreads. And, most importantly, people who lived at the lower ends of the eceleon are now able to speak for the President.

But, putting the attractive language aside, the message is to evoke hope in a crumbling country. I don’t want to be a pessimist when it comes to global issues. But, there just seems to be a narrative that doesn’t at all feel like it reflects reality. When she mentions forces of evil, she’s refering to the past administration, the advocates of it, and previous tragic events. And this is where I have to jump out the car before we really speed over the ice sheet. The message that we’ve defeated a regime of facism, as hyperbolic as it may sound, is nowhere close to reality.

Granted, I share her own personal optimism. During this crisis, I, and hopefully other people, took the time to improve. But, I doubt  we’ll see much of an improvement in the country, as nihilistic as it sounds. It isn’t even that we don’t have the potential to strive; there are those who would rather hold themselves down single handedly. This country is filled with people scared, low self-esteem, and ignorant enough to have an opinion that doesn’t concern them or are spoon fed an opinion. Even worse, there’s one mentality that plagues the country: worrying about things that you can’t control and not worrying about what you can control.

I don’t find this a coincidence either. The system drives off of fear. The best way to convince people that they need your help is if they fear their neighbors. And America has been kept in solitude, sitting in the window sill, watching door to door. Additionally, as you could tell, I’m going to have to diverge from Gorman once again. I don’t think democracy was delayed: it was fully embraced by those who are so self-assured by their ignorance or by those who can create a common enemy. This is how, from my perspective, we’ve gotten into this situation.

Both sides of the country, regardless of what side, have only grown a larger base! This administration, love it or hate it, barely scraped by. Now in the US, people aren’t even willing to listen to each other. We live in an era of post-truth where friendships and conversations are dependent on matters we can’t even control. We talk about affirmative actions by actors we hardly can influence or know about. A waste of time and energy if you ask me. And it sure doesn’t seem like “we [closed] the divide…” for the sake of our future.

But of course, I can’t wait to hear from our charismatic, senile leaders. Sarcasm aside, I do think there is a light at the end of this. Hopefully, people realize to become self-dependent, that there’s a usefulness of searching for their own truths, and becoming strong enough to speak out in a world of conformists. I have my own separate reasons for my hope and convictions that guide me. We share the same eyes, yet our iris’s are so different that being heterochromia is what separates Gorman from seeing a freshwater pond to where I see an ocean. And, if there was a thirst to keep moving ahead with such a child like jubilee, only one of us will start drinking with our wrinkled fingertips. And when one of our lips dry, chap, and peel after barely making it to shore, you already know who it is. ” - Antonio P.

"Friends of mine who don’t even enjoy poetry (or at least, they think they don’t) raved alongside my poet friends about Amanda Gorman’s piece after the inauguration. There’s a lot that’s wonderful about this piece, but I think it also serves as an excellent example of poetry that is engaging, relevant, and accessible." - Angeliki V.


Another student, Bella F. wrote a poem to describe her feelings:

"Perhaps it is because

To the remnants of a nihilist

That I am distrustful of a thing called


You see there’s this thing

And while I hate politics

I think there’s a lot


What does it mean to heal a country

To bring about peace

When not everyone can be happy


What does it mean to be a light

They’re the ray against darkness

What does it mean to face the ugly

Side of yourself, your people, your blood, your country

When people would rather gouge their eyes

Of this broken history

Because while the pen

Is mightier than the sword

It does not matter

When the word can lie"

And another, Henry F., penned a letter:


I heard you were running for President in 2036. If I should still be alive, you have my vote.


After sleeplessness had embedded itself into my blankets and nausea into my plates, I stared numbly at the television, watching a thinker.


I watched someone who understood so much in five minutes, it was as if she was there as history unfurled each ugly wing.


How can you be a parochial artist


If all the hatred in your heart

Pinning you to the corkboard


We at 826CHI remain inspired by Gorman and our students and invite other students, educators, authors, and greater Chicago community to join Gorman and us in making history.