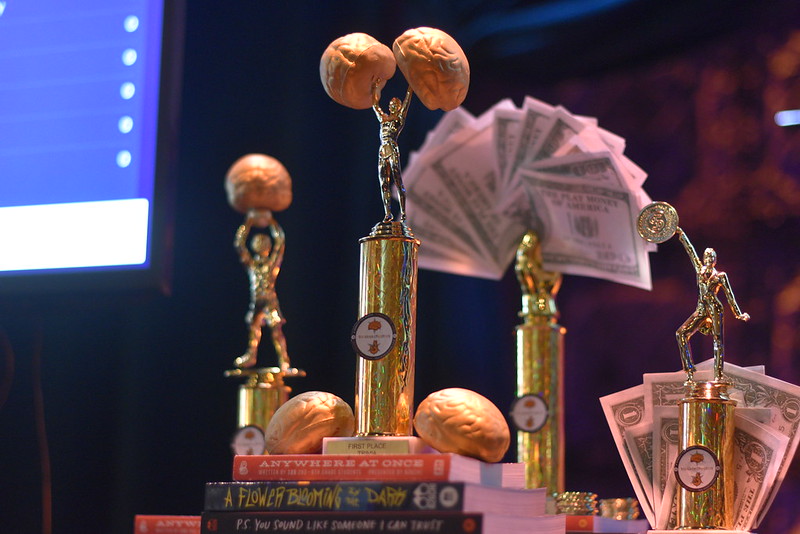 This past Friday, February 7th, 826CHI hosted our second annual Trivia for Cheaters competition. Chicago's most duplicitous trivia teams assembled at the Den Theater, where 826CHI first opened its doors in 2005, for a night of eclectic trivia and creative bribes in support of our 2020 Young Authors Book Project. The most legendary bribe of the evening perhaps, was when Kelly Dull of Guys & Dulls presented Peter Sagal sugar cookies decorated with his book cover in exchange for accepting a wrong answer.

After a hard-fought battle, A Fistful of Answers took home the first place trivia trophy for the second consecutive year. Just one point behind the winning team, Alternative Facts and John Bolton's Mustache tied for second place.

The true victory of the night, however, was raising a whopping $17,000 to support the publication of our forthcoming Young Authors Book Project. This anthology of lyrical essays about living and belonging in Chicago was penned by ninety 12th grade students at George Washington High School in Hegewisch. From October through January, 826CHI staff members have visited the school weekly to discuss and reflect on how these young writers' ideas of belonging have evolved as they've grown. The resulting essay anthology taps into these students' experiences, imaginations, dreams, and knowledge in order to present a clear portrait of how Chicago has and has not welcomed them. The book, which features a foreword by WBEZ's Natalie Moore, will be released at a student reading in May.

Congratulations to all of our teams. A big thank you to everyone who fundraised, donated, and pitched in to make the night such a success, particularly Peter Sagal, WBEZ, our 2020 media sponsor, and Irazú, for donating a feast for the ages.

You can relive the festivities in our Flickr album.

Cheaters Unite! Trivia for Cheaters 2022 is Coming!
Adam Toledo and Jaslyn Adams
Teen Writers Studio Heads To ChiTeen Lit Fest
826CHI Students Respond to "The Hill We Climb"
Stop Asian Hate: Resources for Advocacy & Education
Reflecting On Amanda Gorman
Chaos Still Comes Naturally: Catching Up With Mariela Valdivia
Where Are They Now: Catching Up With Authors of "I Will Hold You Like a Bible"
Calling All Community-Based Organizations: 826CHI Program Enrollment Is Open!
Attention, In-School Educators: Field Trip Program Enrollment Is Open!